Lost your password? Please enter your email address. You will receive a link and will create a new password via email.

FrankBanker Forum is the place to ask a question, respond to queries or simply share your views, you must login.

Please briefly explain why you feel this question should be reported.

Please briefly explain why you feel this answer should be reported.

Please briefly explain why you feel this user should be reported.

The Crypto Promise to Cross-Border Banking 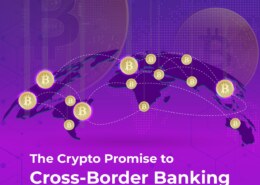 Cross-border banking is not just one of the earliest crypto use cases but also immensely impactful. This is because it enables a truly standardized, secure, censorship-resistant, cheaper, and faster alternative to current solutions.

However,  crypto is still swooping into the much-monopolized banking industry. It is the need of the hour. For several reasons.

For example, SWIFT, the hero of cross-border payments, is losing charm. It has remained stagnant for years now – payments can be made only during given banking hours and get completed a few days later. And let’s not forget the costly transaction fees.

For availing banking across developing and underdeveloped countries, transaction fees are anywhere 5%-10%. This system enables the monopoly of big banks holding trillions of liquidity among themselves over the years.

Traditional cross-border transactions are slow, error-prone, and costly despite huge remittances. There are certainly no economical benefits to executing large-scale transactions.

Crypto innovation in cross-border banking provides trusted real-time verification of transactions. This happens without any intermediaries such as correspondent banks and dependence on a third party.

Traditionally international transactions are carried out through a network of banks and a global messaging system called SWIFT, short for Society for Worldwide Interbank Financial Telecommunications. It is a framework that redirects transactions through various banks using a coded messaging system. Currently, the SWIFT system has over 11,000 banks and financial institutions, sending out over 42 million messages every day to complete cross-border transactions. This system gets a little complicated, expanding a simpler transaction into several steps instead of a simple peer-to-peer transfer. That said, over 4% of payments using SWIFT fail.

But, Blockchain technology in cross-border banking aims to enable secure transfers between an infinite number of bank ledgers. This allows bypassing banking intermediaries. The transactions  remain secure, quicker, and cheaper and have full transparency. This is very different from existing methods as it reduces the probability of fraud. This is in the context of the Central Bank of Bangladesh losing $81 million due to hacking.

When it comes to cross-border banking, crypto and blockchain can be used for several services like due diligence and loan creation, automating bill liquidations and loan contracts, and international payments.

Recent research by non-profit Stellar Development Foundation and UK-based cryptocurrency payments platform Wirex has revealed an increasing use and acceptance, of cryptocurrencies for cross-border payments in four key developed and emerging countries (United States, United Kingdom, Mexico, and Singapore). More than 53% said they felt they paid too much in fees for international remittances via traditional financial means, such as wiring fiat currencies, while 37% said they didn’t know what they paid in fees.

The benefits of cross border banking via crypto

The current state of affairs

Several startups are stepping into cross-border banking with crypto solutions. Ripple was the first of them – a fintech company with XRP as their token and RippleNet payments network. They enable cross-border settlement and currency exchange in real-time by adding banks to their distributed ledger network. IBM has its pilot distributed ledger international payments system called the IBM World Wire, allowing members to transfer funds and exchange currencies in the Stellar cryptocurrency. J P Morgan has JPMCoin to facilitate banking between countries, quicker.

According to Gartner, by 2024, for example, at least 20% of large enterprises will use digital currencies for payment, store of value, or collateral, which will disrupt current financial networks and business models. This raises concerns with regulatory bodies across the globe to understand and foray into crypto as soon as possible. Today, Central Banks across the world are pondering on genuine use cases of Central Bank Backed Digital Currency. So far, 83 countries are experimenting with or implementing so-called Central Bank Digital Currencies, or CBDCs, which represent 90% of global GDP, according to the Gartner study.

China has already distributed more than $5 billion of digital yuan to its people in 2021.

To tackle the problem of standardization, ‘Project Dunbar’ is underway. Several central banks and the Bank for International Settlements have developed prototypes for a common digital currencies platform that has the potential to make cross-border payments more efficient. The aim is to transact directly with one another on a shared platform, reducing the need for intermediaries and cutting costs and time.

Even, SWIFT is being swift to catch up on innovations by partnering up with Capgemini to study and explore relevant blockchain-based solutions.

According to a report from Juniper Research, blockchain technology can help banks cut cross-border payment costs by $10 Billion in 2030 and also improve payment transparency and traceability. However, as per Juniper, many banks were reluctant to move away from traditions, and systems. Understandably, blockchain networks must further improve on the consolidation of robust blockchain-based identities, secure and user-friendly key management and interface, assurance of the transaction scalability, interoperability between multi-purpose blockchain networks and specific-purpose settlement networks, legal frameworks, regulatory policies, etc. When it comes to end-user adoption, digital wallets and the integration of fiat-crypto conversion services are a must.

What would differentiate crypto banking from traditional is decentralized registries of information, peer-to-peer solutions, emerging crypto-financial assets, and digital wallets. These hold the potential to bring transformations to the international financial system in terms of development financing through grants and loans to the countries, as well as enabling more efficient remittance corridors across borders.

You must login to add an answer.

Posting of any promotional, political, religious or personal comments is not encouraged and will be moderated.

"How RBI is calibrating its Liquidity Management strategy?"

FrankBanker Points indicate your level of engagement on the Forum. More you engage and share with the Banking and Finance community here, more points you earn. Levels : Enthusiast->Informed->Learned->Pro->Expert->Enlightened.